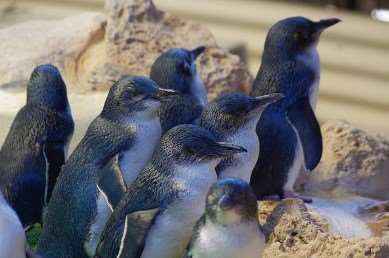 Native only to the southern coast of Australia and New Zealand, little penguins, also known as fairy penguins in Australia, are just one of the many fascinating creatures you can get up close to as part of Distant Journeys’ tours of Australia. Before you meet these cuddly and adorable birds in person, we’ve put together a short fact file to help you get to know and learn more about the little penguin. 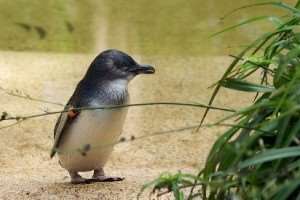 Out of the 17 different species of penguin, the little penguin is the smallest, with adults measuring just 40cm tall when standing, and weighing around a kilogram. Like other penguins, they stand upright on land, waddling on their hind legs, using their flippers to propel themselves effortlessly through the water. Little penguins are a blue-grey colour, with a white underside and throat, as well as a black beak, pale pink feet and grey eyes. Males and females look slightly different from each other, as males tend to be slightly taller, have a deeper bill and a larger head. 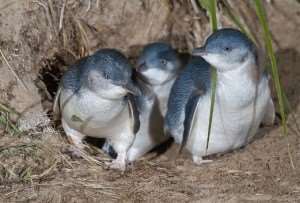 The little penguin population is spread across the entire southern coast of Australia, stretching from Fremantle in the west to New South Wales in the east. On a Distant Journeys tour, you’ll be able to meet the penguins at Phillip Island as an optional extra, a short distance from Melbourne, which is home to one of Australia’s largest little penguin colonies. 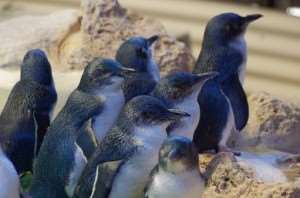 Little penguins love to dine on small fish such as anchovies, pilchards and whitebait, diving as deep as 60m in order to find its food, though the average diving depth ranges between 5 and 20m below the surface of the water. While they rear their chicks, juvenile whitebait is the little penguin’s food of choice. 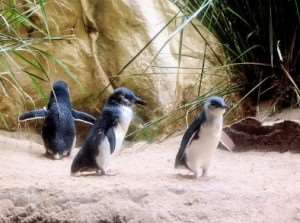 Like other birds, little penguins rely on calls to communicate with each other. They use up to nine different calls for different purposes and in different environments, ranging from short, sharp barks used at sea to sharp, snorting yelps, used when disturbed. Although they can spend incredibly long periods at sea, due to being excellent swimmers, they generally only tend to spend the day at sea, returning back to the safety of their colonies after dark. 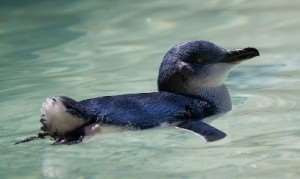 Breeding and raising their young

Little penguins begin to breed at around the age of three years old, nesting by squabbling and squawking over nest sites, before settling into sand dunes, burrows, rocks or caves with their nests. They breed between June and September, laying clutches of two eggs at a time. Both parents then take it in turns to sit on the eggs to keep them warm, before they hatch after 5 weeks. If more than one chick is born, often only one chick is raised, unless it is easy to locate food. For the first 15 days or so of its life, it will always be protected by one of its parents while the other looks for food. After that, the chick will be left on its own while both parents hunt for food, and once they reach 8-9 weeks old, the chicks finally leave the nest and head to the sea to search for their own food.