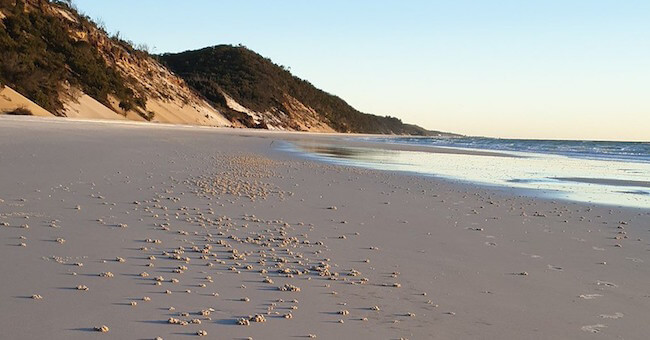 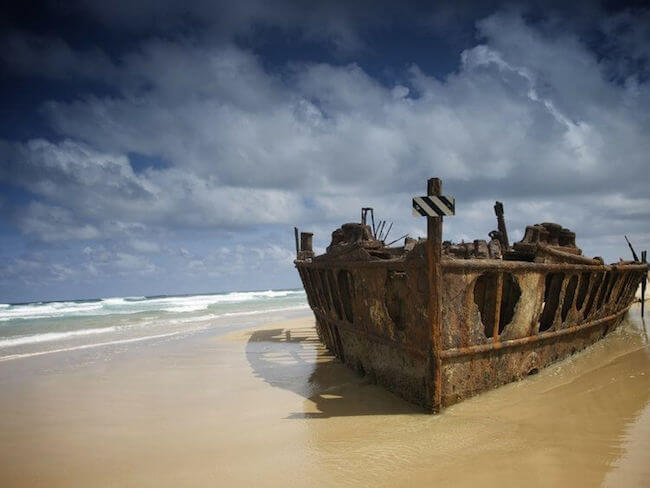 Over the centuries, Fraser Island has claimed many shipwrecks, with the most famous being the Maheno Shipwreck. Built in 1905, the SS Maheno was sold as scrap to Japan in 1935. As it was being towed, a cyclone broke the tow chain, causing the ship to wash up on Fraser Island’s beach. Today it’s an island landmark, and if you’re wondering what to see on Fraser Island, you can’t miss the Maheno Shipwreck: a huge rusted structure beached on the island’s golden sands.

A scenic creek flowing along the eastern side of the island, Eli Creek is one of the prettiest things to see on Fraser Island. Starting from the 75 Mile Beach, one of the most breathtaking beaches in Australia you should visit, follow the creek inland along the boardwalk, wandering amongst banksia and pandanus plants, before stopping for a picnic or a swim in the water. From the bridge, you can even float along the fast-flowing waters of the creek.

There’s no better way to marvel at the miracle of this enormous sand island than from in the air, where you can get a real birds-eye view of the sheer scale and beauty of Fraser Island. With a scenic flight operated by Air Fraser Island, you’ll get to enjoy the unique experience of taking off and landing on a sandy beach, taking to the skies for some amazing Fraser Island discovery. Your flight will take in sights such as Lake Mckenzie, Lake Wabby, Eli Creek, the Maheno Shipwreck, the Pinnacles and much more before touching back down on the sand.

If you’ve got just a short time to visit Fraser Island and you want to see as much of it as you can, why not hire a 4×4 to explore every corner of the island in comfort? Fraser Dingo 4WD Hire offer day hire of a Toyota Landcruiser, as well as a personalised itinerary highlighting the best places to go off-road during your day on Fraser Island. Drive to some of the top Fraser Island attractions such as Lake McKenzie, Central Station, The Pinnacles and more, and you can stop and get out to take photos whenever you please. During the drive, you may even see some dingoes, the island’s native residents.

Off the north-western coast of Fraser Island, the Hervey Bay Marine Park is recognised as the whale watching capital of the world. Between August and October, because of its calm, shallow waters, majestic humpback whales take a break from migration here to feed the young calves and prepare them for survival in the oceans. Fraser Island Whale Watch offers an unforgettable whale watching cruise guided by an expert, where during these summer months, you are pretty much guaranteed to see a humpback in the clear waters of the bay. For something extra special, you can even upgrade your package to swim with the whales.

If you’re wondering what to do on Fraser Island on a beautiful summer’s day, a refreshing swim in the unusual Lake Wabby has to be on your list. Surrounded by lush forest on one side and vast sand dunes on the other, Lake Wabby is the largest and best example of a dune lake on the island. The contrast of the dunes and forest reflect on the water and make it a wonderful deep green. As you swim through the clear waters, you’ll see up to 12 different fish species flitting through the water around you.

Last but certainly not least, The Pinnacles are one of the most iconic sights on Fraser Island, joining the list of the island’s natural wonders such as Eli Creek and Lake Wabby. Take a walk down the 75 Mile Beach to find The Pinnacles, also known as the Coloured Sands – there is no way you can miss them. These sandy cliffs tower above the beach and feature countless different hues of reds, oranges, yellows and browns, and also change colour as the sun moves across the sky. Heading here to see the sunrise or sunset is one of the best things you can do on Fraser Island.

Discover many more of Australia’s most beautiful sights

Fraser Island is far from the only place in Australia steeped in natural beauty. See even more of the highlights for yourself on our Australia tours with UK departures, taking in spectacular views such as sunrise at Uluru (Ayers Rock), Katherine Gorge on board a cruise ship and thousands of miles of wildest rural Australia on board The Ghan.