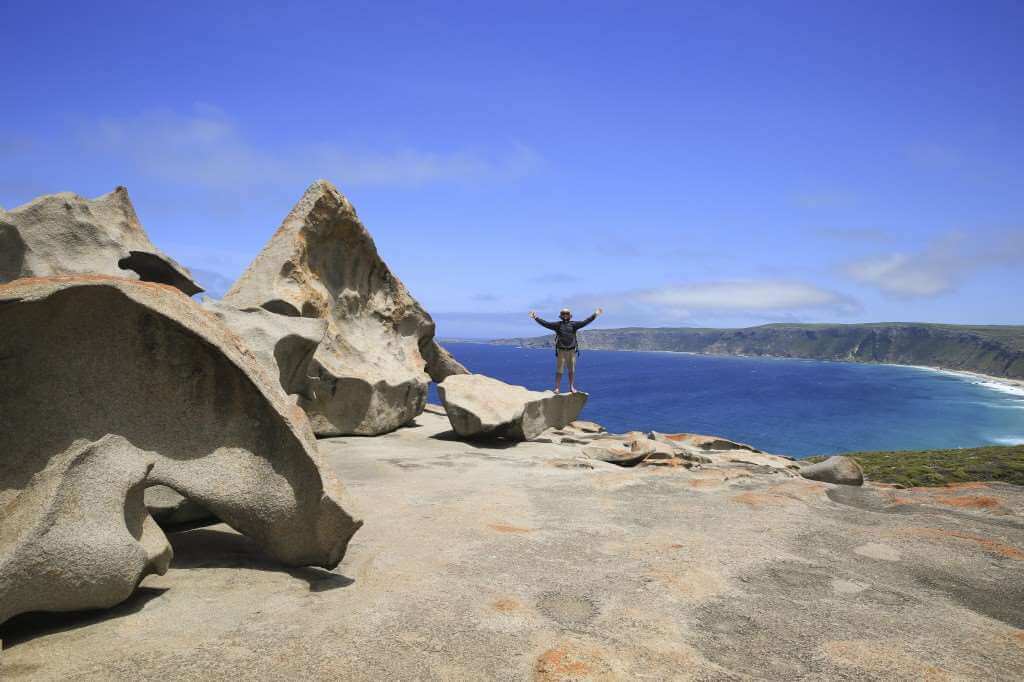 Walk amongst the wild things at Kangaroo Island

Walk amongst the wild things at Kangaroo Island

Picture this: sea lions lazing on the beach at one turn, kangaroos hopping through the grasses at another, koalas clambering trees above you and penguins dancing on the shores beyond you… Well, it’s exactly what you can expect to find at Kangaroo Island, Australia.

Explore a kingdom of amazing animals

Visiting Kangaroo Island is like walking into a true animal kingdom – you really couldn’t wish to get closer to the friendly creatures! At the island’s Seal Bay Conservation Park, you can wonder amongst wild Australian sea lions and New Zealand fur seals as they relax and play on the beach (to help you tell the difference between the two, the New Zealand fur seal has ear flaps!) Then there’s Hanson Bay Wildlife Sanctuary, where high up in the eucalyptus trees you’ll spot koalas lazing their day away.

One of the best things to do in Kangaroo Island is pay a visit to Chase National Park. A sanctuary for native Australian animals such as kangaroos, wallabies, koalas and echidnas, you’ll have the chance to meet a short-beaked echidna, tammar wallaby, brushtail possum and southern brown bandicoot. Some of the park’s more exclusive inhabitants include the critically endangered Kangaroo Island dunnart, native goanna and snake species, six unique types of bat and six frog species specific to Kangaroo Island.

The amazing wildlife doesn’t stop there! Making their home in the island’s waters and coral reefs are leafy sea-dragons, blue devils, and harlequin. And after dark, a colony of fairy penguins put on a spectacular display at the Kangaroo Island Penguin Centre.

Visit Kangaroo Island and you’ll have the chance to meet all of these amazing animals and more.

Loose yourself in the island’s natural beauty

On a Kangaroo Island tour from Adelaide, you’ll be amazed by the natural beauty constantly surrounding you. Even on your journey to the island, you’ll look out onto the vineyard littered hills and coastal landscapes of the Fleurieu Peninsula before boarding the Kangaroo Island ferry to Penneshaw.

There are so many things to do in Kangaroo Island, with a highlight being an exploration of the rugged coastline’s Remarkable Rocks and Admirals Arch. The stunning sea views from Remarkable Rocks are unrivalled, while the Admirals Arch boardwalk will lead you down a cliff face, through a rock archway and to the area where New Zealand fur seals can be seen resting on the rocks, or swimming and playing in the water.

Kangaroo Island tours will ensure you visit the national and conservation parks which make up more than one third of the island. At Kelly Hill Conservation Park, you’ll find the most magical maze of dry limestone caves and tunnels just waiting to be discovered. Then at Cape Willoughby Conservation Park, you’ll be introduced to South Australia’s first lighthouse, which you can climb to the top of to enjoy some of the best views South Australia has to offer.

If you’d like to wander at your leisure, the many walking trails are lined by wild flowers and towering gum trees, and are well sign-posted with the aim to educate you on your surroundings as you explore.

Kangaroo Island tours feature on many of our escorted tours to Australia from the UK, so if you get the chance to visit, make sure you don’t let this wildlife-filled wonder pass you by!