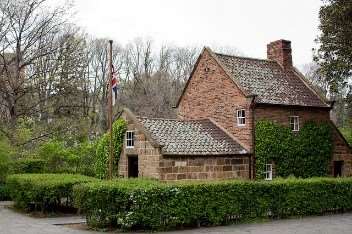 The history of Captain Cook’s Cottage

The history of Captain Cook’s Cottage

Today, Captain Cook’s Cottage is one of the most famous attractions in Melbourne, a slice of history situated in the scenic Fitzroy Gardens, and just one of the great landmarks you’ll get to learn more about on our Australia holiday tours, which include a guided tour showing you the very best of Melbourne.

Although today, Captain Cook’s Cottage is an integral part of the city and a testament to its origins, one of the most intriguing facts about the cottage is that it was in fact built on the other side of the world, in the village of Great Ayton in Yorkshire!

James Cook moved with his family to Great Ayton when he was around 8 years old, and it was possible that he spent most of his boyhood there, before leaving in 1745 to begin his apprenticeship with William Saunderson, the grocer of Staithes. Cook later made a return to the cottage following his great Australian voyage, spending some time with his father in the winter of 1771/72. As the original thatched cottage which Cook was born in in Marton-in-Cleveland was destroyed in 1786, this family cottage is the only concrete historical link with the great captain’s origins.

Mrs Dixon, the last owner of the cottage, put it up for sale in 1933, and it was suggested that it would be the perfect focus piece for Victoria’s centenary in 1934. It was purchased the same year by influential Melbournian Russell Grimwade, who wished to present it as a gift to the people of Victoria. The move to Australia was something that took a little while to persuade Mrs Dixon of, as she wished for it to remain in Britain, but eventually she accepted the offer, as Australia was still a part of ‘the Empire’.

It was then dismantled and shipped to Melbourne in 253 packing cases, arriving in April 1934, and reassembled as accurately as would allow in order to keep its mid-18th century appearance. Construction took six months, and was presented to the Lord Mayor during a centenary ceremony in October.

Since its construction, the cottage remains a main point of interest in Fitzroy Gardens. It has undergone just two restorations since, the first in the late 1950s, and the second in 1978, when the cottage underwent a massive overhaul, complete with furnishings appropriate to the time period and a garden of 18th century character.