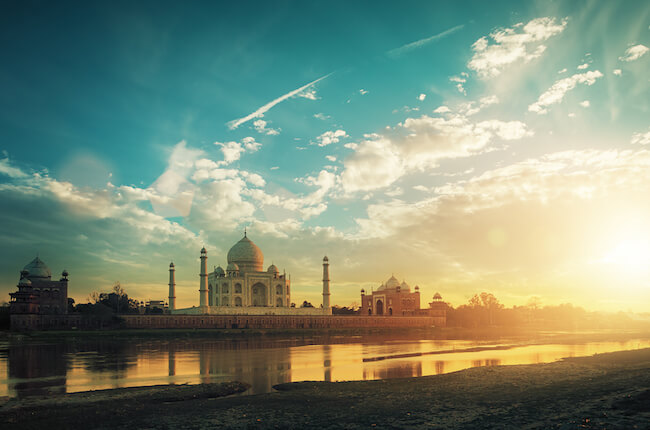 Spectacular sights to see in Agra, India: home of the Taj Mahal

Spectacular sights to see in Agra, India: home of the Taj Mahal

Found on the banks of the Yamuna river in the Uttar Pradesh region, Agra has become one of the most popular cities to visit in India, with tourists flocking here from all over the world. It boasts a rich legacy of the former Mughal empire, which has left behind beautiful buildings, forts and tombs, and you could spend hours browsing the bustling chowks (marketplaces) for unique souvenirs. If you’re planning on visiting this alluring city and wondering what to see in Agra, here are some of the sights to see in Agra you definitely should not miss. 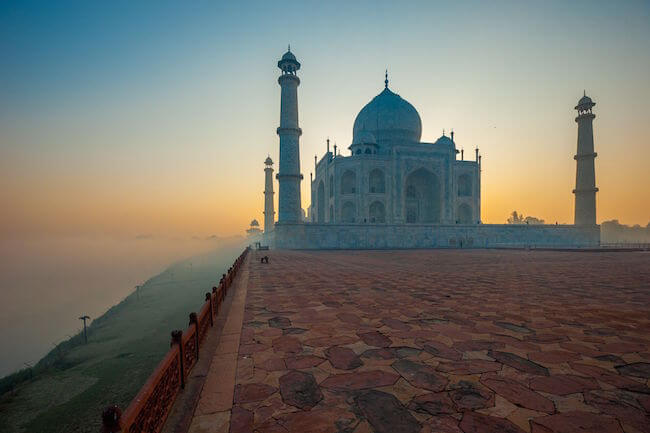 Often described as one of the wonders of the world, the Taj Mahal is an absolute must-see and one of the most famous landmarks in the entire world, let alone in India. Built from beautiful white marble in 1628 under the Emperor of the Mughal empire, Shah Jahan, the Taj Mahal was built as a mausoleum in memory of Jahan’s wife, Mumtaz Mahal.

More than 20,000 builders, artists and craftsmen brought the Taj Mahal to life, where no detail has been spared; you’ll find semi-precious stones embedded in the walkways, elaborate carvings and calligraphy, and lush landscaped gardens surrounding the Taj. It’s a very popular attraction, but well worth visiting despite the crowds.

Want to learn even more about the love story of Shah Jahan and Mumtaz Mahal? Be sure to also catch the Mohabbat the Taj show in Agra, which brings you the whole story in a spectacle of dance, lights and music.

If admiring the Taj Mahal itself wasn’t enough, you can add to the Taj Mahal experience by learning all about it at the Taj Museum too. Found in the western part of the Taj Mahal complex, you can discover a variety of artefacts dating back to the Mughal era, alongside paintings of the Taj Mahal, Shah Jahan and Mumtaz Mahal from throughout the centuries. Among some of the more interesting items to look out for in the Taj Museum are Mughal weapons, calligraphic art carved in Jade, and royal documents and maps, including the original plans for the Taj Mahal. 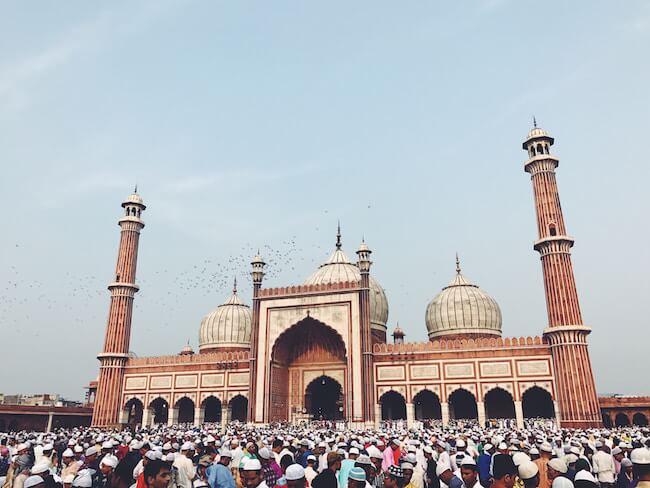 Another place to add to the list when Agra sightseeing is Jama Masjid, the largest mosque in all of India. This is the final architectural masterpiece built under the emperor Shah Jahan alongside places such as the Taj Mahal and the Red Fort.

Built from red sandstone with white marble adorning the minarets, Jama Masjid is a truly beautiful mosque and extravagant in every way, with its three gates and four towers all highly decorative. After putting on a set of robes, step into the giant courtyard, where up to 25,000 Muslims can gather and pray, before admiring the beauty and detail of the building. 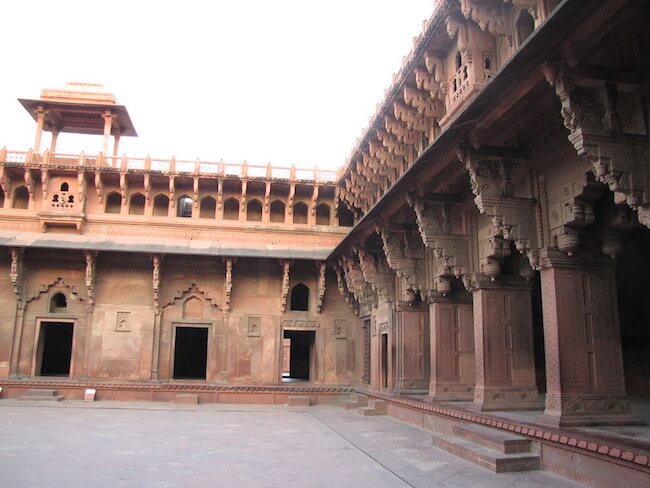 With a beauty rivalling that of the Taj Mahal, be sure to add the Agra Fort to your list of things to see in Agra. Lesser known than the Red Fort, but with more areas accessible to the public, the impressive Agra Fort looks over the Yamuna River.

Initially built as a military fort by Emperor Akbar in 1565, you can’t help but admire the huge 20-metre-high walls, maze of buildings and underground sections – a huge feat for something built 500 years ago. The fort was then later embellished by Akbar’s grandson, Shah Jahan, who used his favourite white marble to further adorn the red sandstone and then turn it into a beautiful palace.

The last in a series of 11 parks constructed on the east bank of the Yamuna River, way before the idea of the Taj Mahal was ever conceived, Mehtab Bagh has become one of the best viewpoints in all of Agra, especially for seeing the Taj Mahal.

Perfectly aligned with the gardens of the Taj Mahal, with the iconic building in the centre, the view from the fountain at Mehtab Bagh offers the ideal photo opportunity, especially at sunset. The gardens themselves here are also a delight to walk around, lined with brightly coloured flowers and fruit trees.

Discover one of India’s most beautiful cities

Fall in love with this historic Indian city with a holiday where you can wander amongst its beautiful palaces, historic buildings and lush gardens: take a look at our tour visiting Agra and the Taj Mahal. The 19-day tour includes 2 nights in Agra, including an unforgettable sightseeing tour of the city.