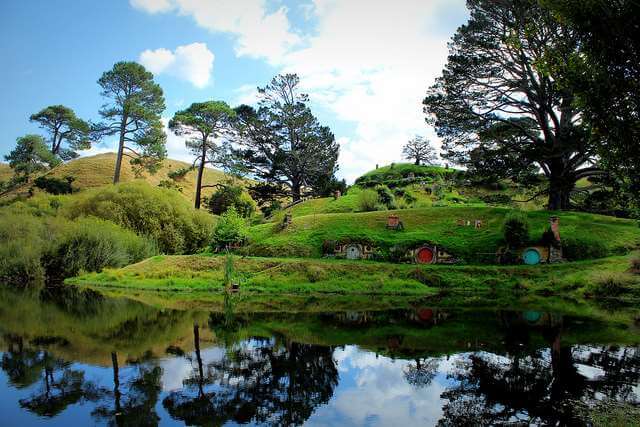 In 2001 the long-awaited Lord of the Rings trilogy hit the big screens all over the globe. High-profile actors such as Sir Ian McKellen, Elijah Wood and Orlando Bloom brought Tolkien’s fantasies to life, but it was New Zealand’s magical landscapes that emerged as the undisputed star of the show. The Lord of the Rings and New Zealand are now synonymous with one another and a New Zealand-based Lord of the Rings tour is an absolute must for any fan of the spectacular trilogy.

With the vast number of New Zealand locations featuring in the Lord of the Rings, it’s difficult to know where to start. However, here are the main spots which should not be missed should you want to follow in the footsteps of Tolkien’s legendary characters:

The Shire and Hobbiton Movie Set

Where better to begin than the Shire itself? Located on the North Island, the town of Matamata plays host to the magical Lord of the Rings film set. A tour of the Hobbiton movie set will guide you through the magnificent 12-acre site, allowing you to see the Hobbit Holes and the Green Dragon Inn, which featured in the films. Not to be missed!

The capital of New Zealand leaves any Lord of the Rings fan spoilt for choice when it comes to filming locations. Arguably the most spectacular is Mount Victoria which can be accessed on foot from Wellington city centre. Surrounding the mountain is the woodland otherwise known as the ‘Hobbiton Woods’ (where the hobbits hid from the black riders). Wellington also features the glorious Kaitoke Regional Park which became known as Rivendell in the trilogy. Furthermore, the area contains the Hutt River (River Anduin) and Harcourt Park (Gardens of Isengard) so it’s safe to say Wellington has plenty to offer!

This rural town offers a gateway into yet more sensational scenery which ensures New Zealand and Lord of the Rings will always be mentioned in the same breath. Stretching majestically besides the village, Lake Wakatipu is just one of the stunning lakes you should visit in New Zealand and is the perfect setting to take in the breath-taking Mount Earnslaw. This area will be recognised from the opening scenes in the second part of the trilogy – The Two Towers. Queenstown is also less than an hour away where the Ford of Bruinen and the Gladden Fields scenes were captured.

If you’re lucky enough to visit the southern island city of Nelson, you’ll get to feast your eyes on one of the original rings used in the films. It’s here, at Jens Hansen Goldsmiths, where all the rings used in the film were made and where one of the original rings is on display. The city is also close by to the locations used for Chetwood Forest and Dimrill Dale. In particular, Dimrill Dale will undoubtedly be a highlight of your trip as it can only be seen from a helicopter!