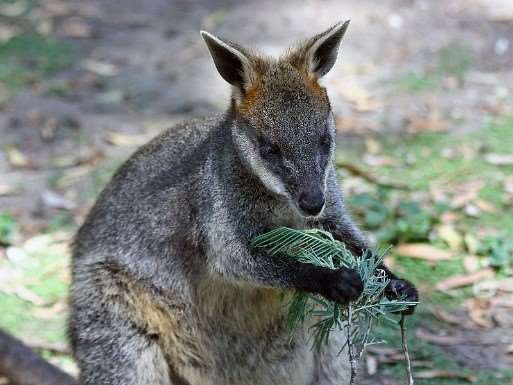 Fun facts about the lovable wallaby

Fun facts about the lovable wallaby

One of the main draws of our Australia holidays is the chance to encounter some incredible wildlife, such as kangaroos, koalas, and of course, the lovable wallaby. Before you head down under, get to know these interesting creatures a little better with our wallaby fact file.

The name ‘wallaby’ derives from a word used by the Eora Aboriginal tribe, the indigenous people native to the area we now know as Sydney.

Wallabies are native to Australia, New Zealand and Papua New Guinea, though they are of course best associated with Australia.

There are currently blurred boundaries around what exactly constitutes a wallaby. Generally, a wallaby is a macropod not considered large enough to be a kangaroo and has not been classed as some other species. They are generally smaller and stockier than kangaroos. Over 30 different types of wallabies can be found throughout Australia, and vary between habitat, including mountainous regions, grasslands and forests.

Wallabies are herbivores, feeding on grasses and plants. Over time they have adapted so that they have elongated faces with plenty of room for their large, flat teeth to chew their vegetarian meals.

Just like kangaroos, wallabies also hop to move about, and hopping is the best way to cover long distances in places which offer little food or water. However, they can only hop forwards, and not backwards.

If you’re looking to seeing wallabies in action, the best time is early in the morning or late in the evening, as most wallabies are nocturnal, meaning that they will be out looking for food at night. You may still be able to spot them during the day, however it is more than likely that they will simply be resting in the shade.