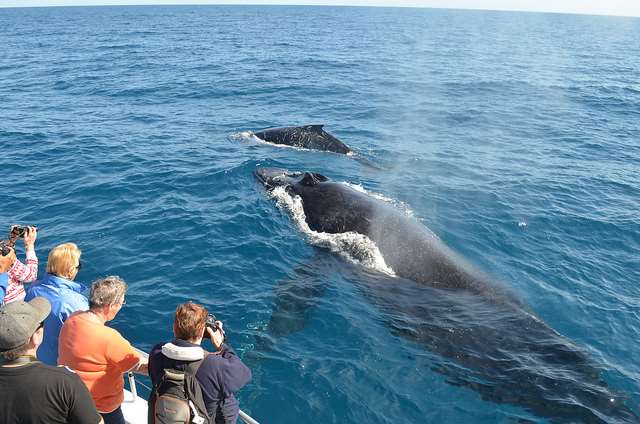 The Best Spots for Whale Watching in Australia

The Best Spots for Whale Watching in Australia

Around the shores of Australia, whale watching is an experience that ever growing numbers of visitors are engaging in and for good reason. There are numerous locations where you can watch these impressive mammals make their unfathomably long migration along the Australian coastline.
The migration begins in late May and runs through until the end of November, giving plenty of opportunities for you to experience these amazing, intelligent sea mammals in their natural environment. You may even see them for yourself whilst visiting on an escorted tour of Australia.

There are many popular whale watching locations and in this post we tell you about some of the best spots to see these magnificent giants in their natural habitat. It is a once in a lifetime experience!

The rich waters off the South Australia and Victoria coasts give visitors many places to spot and see whales, either from land or by boat. You will find Victor Harbours Encounter Bay, a perfect location to watch the endangered southern right whales, who come here to breed between May and October. There are many viewing platforms along the coastline where you can watch the whales leaping from the waters, doing somersaults and tail flips, often within a few hundred meters from the cliffs.

At Logans Beach in Warrnambool between June and September spot southern right whale calves in the nursery close to shore. You can even head to Lady Bay, where the new mums often come in close enough to spray you with breakwater!

The more energetic humpback whale will continue north to warmer waters often seen against the striking backdrop of Sydney’s towering cliffs and sometimes entering the harbour. You can take one of the many whale cruises from the harbour but if you’re spotting from land, Sydney’s best vantage point is The Gap at South Head. The whales will pass Sydney from April until November.

One of your best chances of sighting a whale from land is south of Sydney, at Jervis Bay Marine Park where their presence is so frequent you are almost guaranteed to spot them in the calm clear waters here. The marine park is also home to pods of bottle-nosed dolphins.

From June, Byron Bay often has whales passing and you can see them from Cape Byron Lighthouse, they are often seen playing just a hundred meters from shore!

Heading further up the East Coast, Queensland’s ‘top spot’ is Hervey Bay and is a strong favourite with whale watchers. It has, amongst many, been crowned as Australia’s “ Whale Watching Capital” visit here for further information.

There are many tours leaving the Gold Coast waterways direct to the whale migration track or “whale alley”. If you take one of these tours, be sure to look out for humpback whales, dolphins, turtles, migratory seabirds and other marine life along the way. The Gold Coast boasts many breath-taking marine parks and pristine beaches.

Western Australia has one of the longest whale watching seasons in the world, with whales passing from Albany to Broome. You will often see humpback and southern right whales frolic in the shores especially around Flinders Bay from early June. If you are lucky enough you may also get the chance to see the rare blue whales and their calves during the month of September at the pretty town of Dunsborough, often joined by pods of bottle-nosed dolphins.

The rugged coastline of Albany means the cliffs make a fantastic grandstand to view the whales. You can learn much more about these intelligent creatures at Albany’s Interactive Whale Museum, that was once, ironically, a whaling station.

The list of whale watching locations could go on however, you should also remember that nature doesn’t play along with timetables or romantic ideals, and you may experience the occasional rough sea. You will also most often have the privilege of seeing one of these most magnificent sea creatures that have inspired and fired the imaginations of watchers for generations.