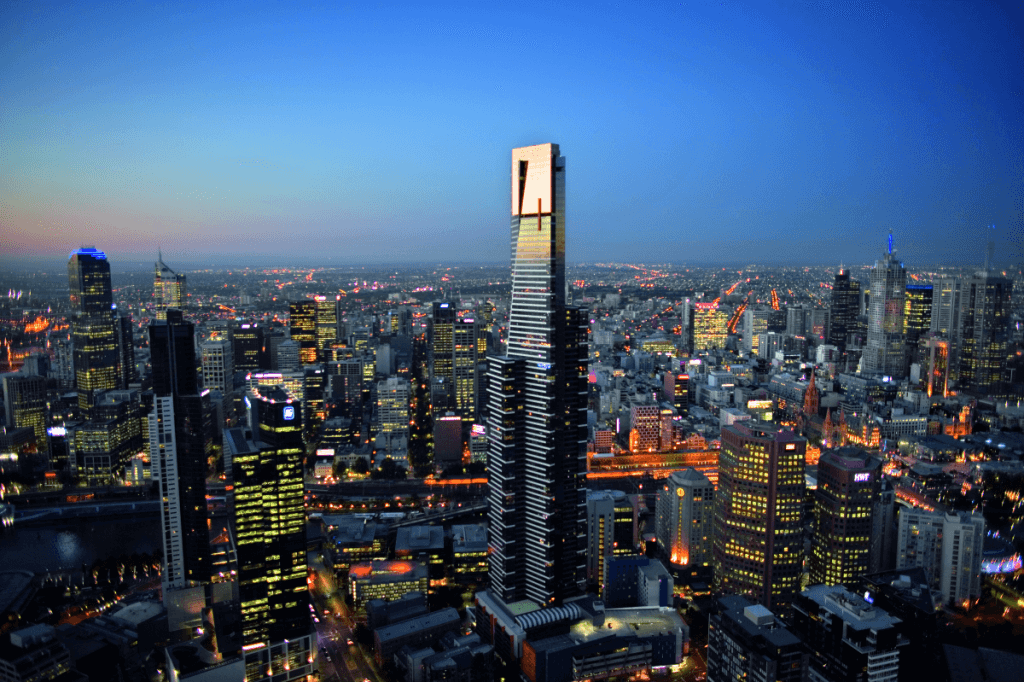 Sydney, Melbourne, Perth, Canberra… the list of great Australian cities to visit is endless. And when you’re there it’s easy to see why they are such a joy to visit – not only are they home to a variety of wonderful attractions, but also some incredible views and architecture. Undoubtedly the best way to take in one of these charming cities is by observation deck – from up high you can enjoy stunning views out over the entire city and beyond. Here are some of the best observation decks in Australia, where you can see all of these beautiful cities in their entirety. 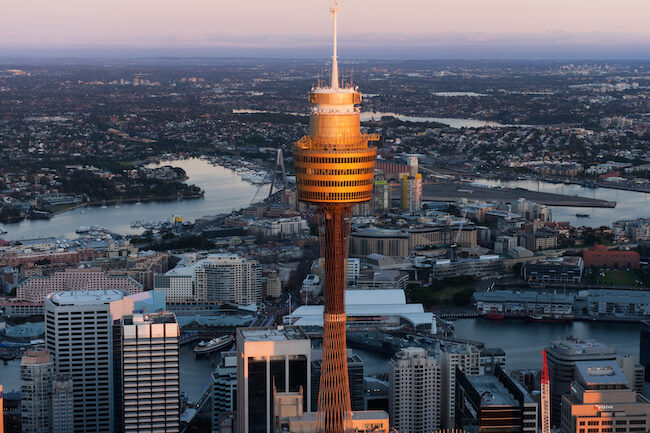 Towering 268 metres above the city streets, the Sydney Tower Eye is an iconic building and the tallest in Sydney. With both an indoor observation deck and an outdoor viewing platform, you can enjoy fantastic views over Sydney whatever the weather. The Sydney Tower Eye also offers a ‘Skywalk’ experience, a glass-floor viewing platform where you can look down on the city below.

From these lofty heights you can see over nearby green spaces such as Hyde Park and the Royal Botanic Gardens, as well as over to Sydney Harbour and its iconic bridge. 360-degree views mean that you can see out in all directions, taking in the Blue Mountains to the west and the Pacific Ocean to the east. 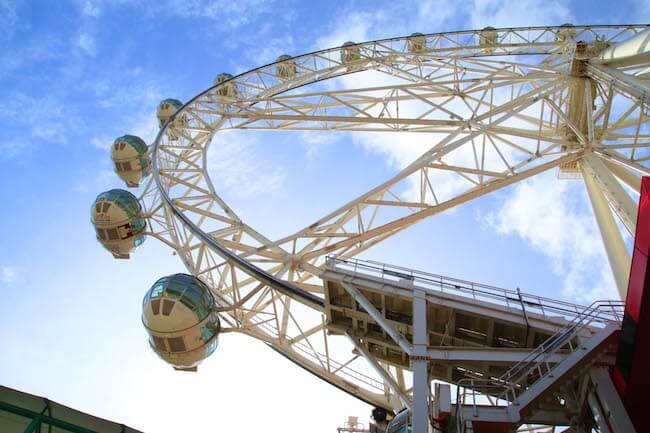 The only observation wheel in the southern hemisphere, the Melbourne Star Observation Wheel is one of our favourite observation decks. Resembling a giant Ferris Wheel, the Melbourne Star offers you 360-degree views over Melbourne from 120 metres up, taking in glittering skyscrapers and the Yarra River, as well as places further away such as the Dandenong and Macedon Ranges.

The Melbourne Star is especially captivating at night, when it offers a light show spanning over 16 million different colour combinations. Twinkling in the sky about Melbourne’s Docklands, the views over to the Melbourne Star are equally as impressive as the views onboard. 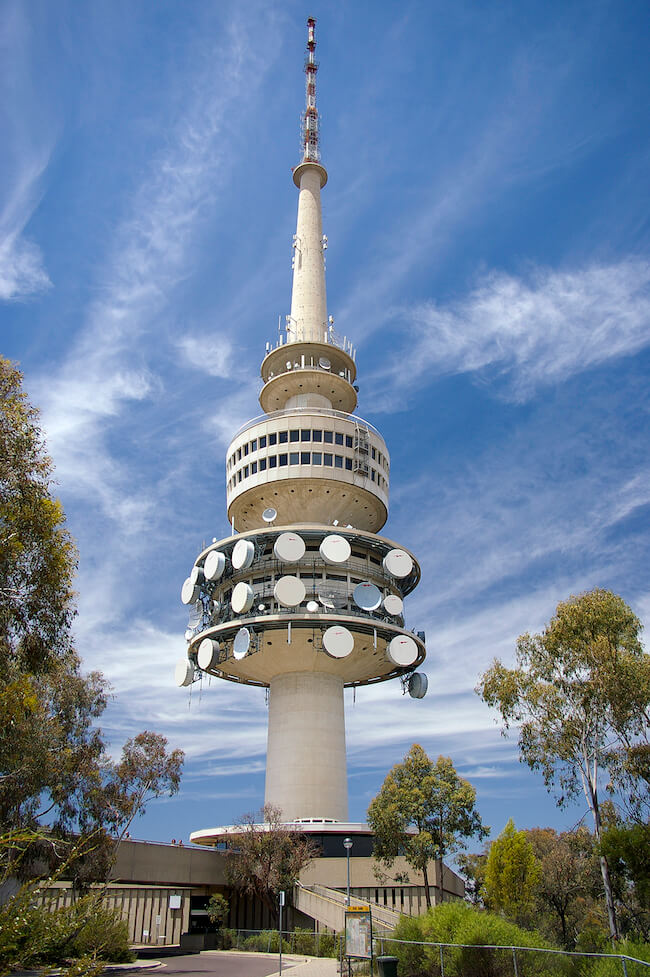 Australia’s capital also offers its own observation deck, the Black Mountain Tower, rising 195 metres high from the summit of Black Mountain on the outskirts of the city, meaning the views over Canberra are from an even loftier height. Also known as the Telstra Tower, as it is also a telecommunications tower, the tower has both an indoor observation deck and two outdoor viewing platforms, as well as a revolving restaurant for those who’d like to dine while soaking up the views.

As the capital city, Canberra is home to some of Australia’s most important buildings, such as Parliament House, and many of these can be seen amongst the city landscape from the Black Mountain Tower. You’ll also have uninterrupted views over places such as Lake Burley Griffin and the Black Mountains themselves, as well as the neighbouring nature reserves like Bruce Ridge and Aranda Bushland.

The Bell Tower, located on Riverside Drive, is one of the stand-out attractions in Perth, thanks not only to its views but also its architecture and history. Its unique design was the result of a major architectural competition, and is home to twelve St Martin-in-the-Field bells, dating back to the sixteenth century, which you can even have a go at ringing.

Up on the observation deck itself, 82.5 metres up, you can enjoy 360-degree views over the Swan River and Perth’s CBD, as well as over to the sprawling Kings Park and Botanic Garden and the South Perth Foreshore. There is also a 26-bell Carillon on the observation deck, which will play well-known tunes with the bells, adding another dimension to this unique experience. 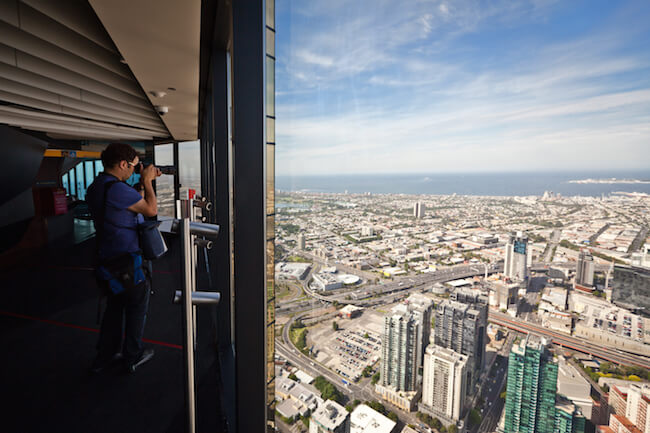 Melbourne is home to not one but two fantastic observation decks. The second on our list is the Eureka Skydeck, found on the 88th floor of Melbourne’s iconic Eureka Tower. A staggering 297 metres above the ground, the observation deck is the highest in the southern hemisphere. From the Eureka Skydeck, you can enjoy a birds-eye view over Port Phillip Bay, Albert Park Lake and Melbourne’s iconic sporting precinct, home to the famous cricket ground, as well as places such as the Dandenong Ranges further out.

For a really unique experience, visitors can try The Edge experience. This offers unrivalled views of the city below, as you stand in a glass cube which then projects itself out from the building – an experience you won’t find anywhere else! 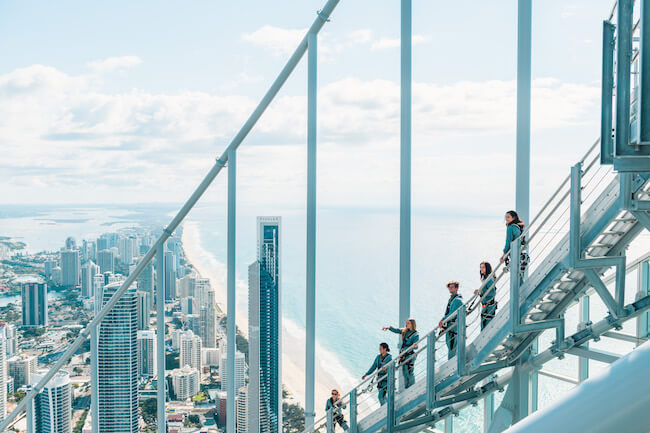 Skypoint also offers Australia’s highest external building climb, meaning you can also take in the stunning views while climbing the 270 metres up this iconic landmark. For those who’d rather relax and take in the views, you can also enjoy 360-degree views from the Skypoint Bistro and Bar.

These observation decks offer just a fraction of the infinite incredible views that Australia has to offer. Alongside its cities, there are beautiful panoramic views to be seen in its many national parks, mountain ranges, rainforests and on its varied coastline.

See even more of Australia with our escorted Australian tours, where we show you the very best of the country and some views you will never forget.