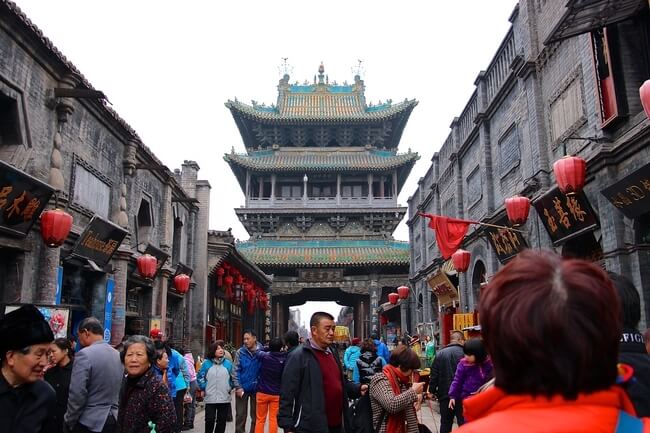 The little-known city of Pingyao, a UNESCO World Heritage Site and China’s best-preserved ancient town, is one of the highlights of our Very Best of China tour, with its fine temples, ancient courtyards, impressive watchtowers, government buildings and towering town walls. Four miles outside of Pingyao, in the nearby village of Qiaotou, you’ll find the stunning Shuanglin Temple, another place to visit not to be missed during your time in Pingyao. If you’d like to explore this stunning temple, a visit here can be added on as an optional excursion on our China tours.

Historians do not know exactly when it was first built, but they do know when the temple was reconstructed, the date written on the oldest stone tablet in the temple complex. Reconstructed in 571AD, the Shuanglin Temple is over 1400 years old, and is included on the World Heritage List as an important cultural site of the ancient City of Pingyao. What makes this beautiful Buddhist temple truly unique is that it is home to more than 2000 colourful painted sculptures, created by anonymous folk artists during the Song, Yuan, Ming and Qing dynasties. For art lovers, this is the quintessential place to visit for ancient Chinese sculpture, renowned as a “world treasure” by experts.

These exquisite sculptures, depicting Buddhist figures and Buddha himself, can be found throughout the Shuanglin Temple’s ten halls. Beneath the veranda eaves in the Heavenly Kings’ Hall, four extremely lifelike Heavenly Kings stand mightily at over three metres high, with one holding a pipa (Chinese musical instrument), the others a sword, a snake and an umbrella. The temple is also home to the One Thousand Buddha Hall, featuring an impressive statue of the bodhisattva Kwan-yin atop a pedestal, as well as over 500 sculptures of Bodhisattva. In the Arhats’ Hall, another mighty sculpture of Kwan-Yin is surrounded by eighteen arhats (those trying to reach nirvana). Each of the arhats have a different facial expression, with the mute arhat being the most famous. His face is the most expressive, with a frowning brow and pursed lips to exaggerate what he is unable to say with words.

A visit to the Shuanglin Temple is the perfect complement to the many other heritage sites and architectural points of interest in Pingyao’s ancient city. These include the Wang Family Courtyard, with its extravagant beauty, and the Xietongqing Ancient Bank, the first ever bank established in China.