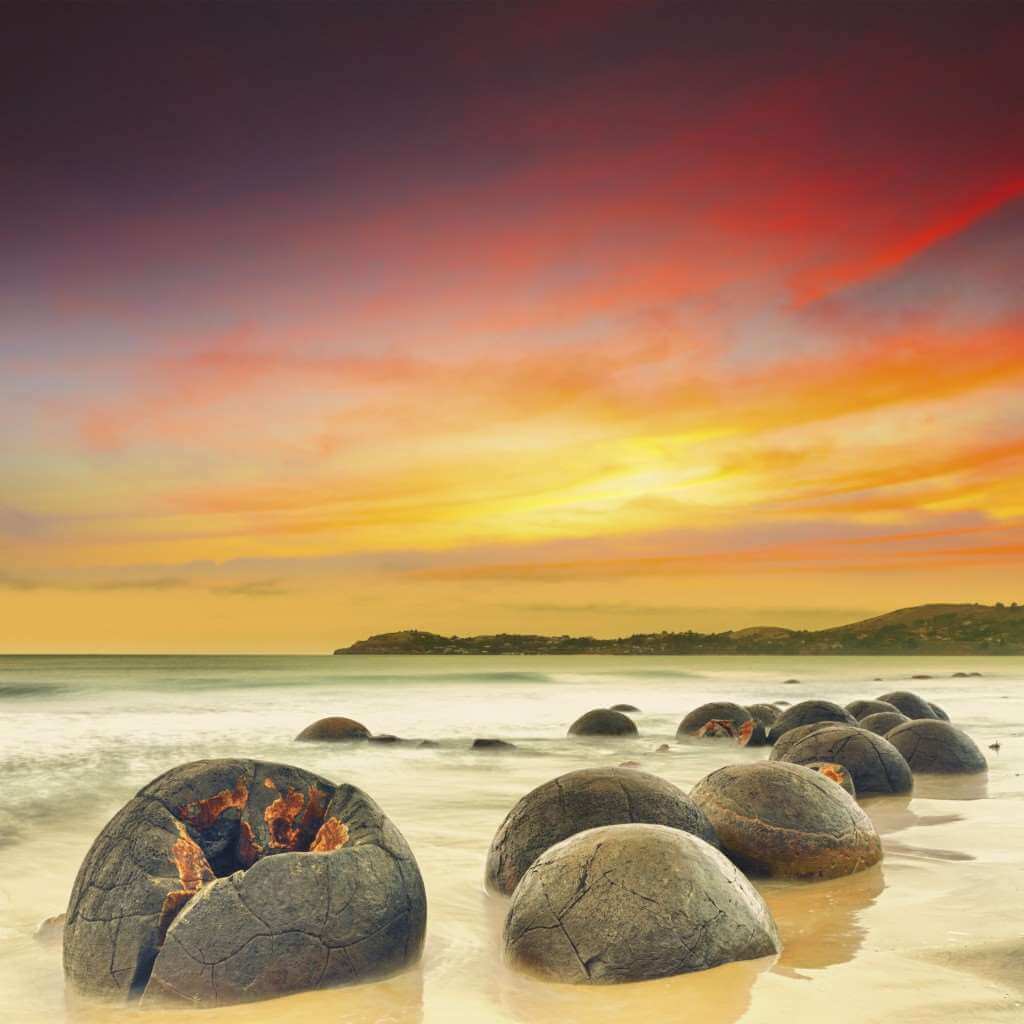 Moeraki Boulders – a natural phenomenon with a mysterious legend

Moeraki Boulders – a natural phenomenon with a mysterious legend

New Zealand has many fascinating legends to offer, all of which only make a holiday to the great country even more enchanting. As well as being one of the top landscapes in New Zealand, perhaps one of the country’s most intriguing tales is the Moeraki Boulders legend. Known to some as the Stonehenge of New Zealand, giant spherical stones that stand up to two metres high and weigh several tonnes, can be seen scattered along Koekohe Beach on New Zealand’s Otago coast.

According to Maori legend, the boulders are what is left of a shipwrecked canoe called the Araiteuru. After the Araiteuru came into trouble at Shag Point – also know as Matakaea – it’s said that calabashes, kumaras and eel baskets were washed ashore and over time, formed the large boulders you see today. If you hear Maori people talking about the “eel pots”, “hooligans gallstones”, “giant gobstoppers”, “alien’s brains” or “the bowling balls of giants”, they are in fact referring to these strange rock formations.

What the science says

Unfortunately, science is here to prove the Maori legend wrong. The Moeraki Boulders are said to have formed due to the hardening of Paleocene mudstone which was buried in the mudstone cliffs. Over time, the sea’s waves have gradually eroded the softer stone to reveal the spherical formation beneath. Scientists believe that their spherical shape is due to their source of carbon being mass diffusion, which lead the rocks to “grow” over five million years, while at the same time, up to 50 metres of marine mud settled on them. The science provides a fascinating, albeit technical tale, which you can discover more about at Kuriositas. But if you’d prefer a bitesize version, here are some short Moeraki Boulders facts you can impress your travel partner with:

How to get there

The Moeraki Boulders can be found nestled between the towns of Moerkai and Hampden on Koekohe Beach. If you’re journeying from the North, it’s about a 30 minute drive south of Oamuru and the scenery along the way is beautiful. Or if you’re coming from the South, it’s around an hour’s drive from Dunedin along State Highway 1. Alternatively, join us on Distant Journey’s Magnificent New Zealand tour and a stop off at the Moeraki Boulders is part of the itinerary!